Special Boy Sews Hundreds Of Bears For Kids In The Hospital

Boy Sews Bears For Kids In The Hospital

This little boy sews bears for kids who are in the hospital, but there’s much more to it than that! Campbell isn’t like other kids who are playing XBox and watching TV. In fact, his mom can’t even make him do those things!

When Campbell was just 9 years old, he asked his parents if he could give presents for the kids who were sick in the hospital. His mom loved the idea, but with 9 children of her own to support, she knew they simply couldn’t afford it. So Campbell decided he would make the gifts, and then he learned to sew.

He became better and faster with each bear. But those around Campbell know he’s not just working to give the children toys.

“He looks at sadness and tries to turn it upside down. . .” said Campbell’s dad, Nathan. “If you get up every day and work forward instead of backwards, you don’t have time to be down.”

Nathan truly knows the impact one of Campbell’s heart-felt gifts can have. And when I learned his secret, the tears just fell.

WATCH: Boy Sews Bears To Give Others Hope

On his Facebook page, Campbell posted the following about his project:

My name is Campbell but everyone calls me Bumble. Im 12 this year.

When I was 9 I asked mum and dad if we could buy christmas presents for kids in hospital when they told me it would cost too much I decided to make them.

I decided that I would make 1 present a day which is 365 a year and give them all away. I have done this for two Christmases now and I love it. I make special bears to auction and fundraise for people too. This is my page to share my story and show you the things that I make.

I use my pocket money to buy fabric and things but if you would like to help me my PO Box is po box 2111, HOWRAH TAS 7018 and my PayPal address is : [email protected] 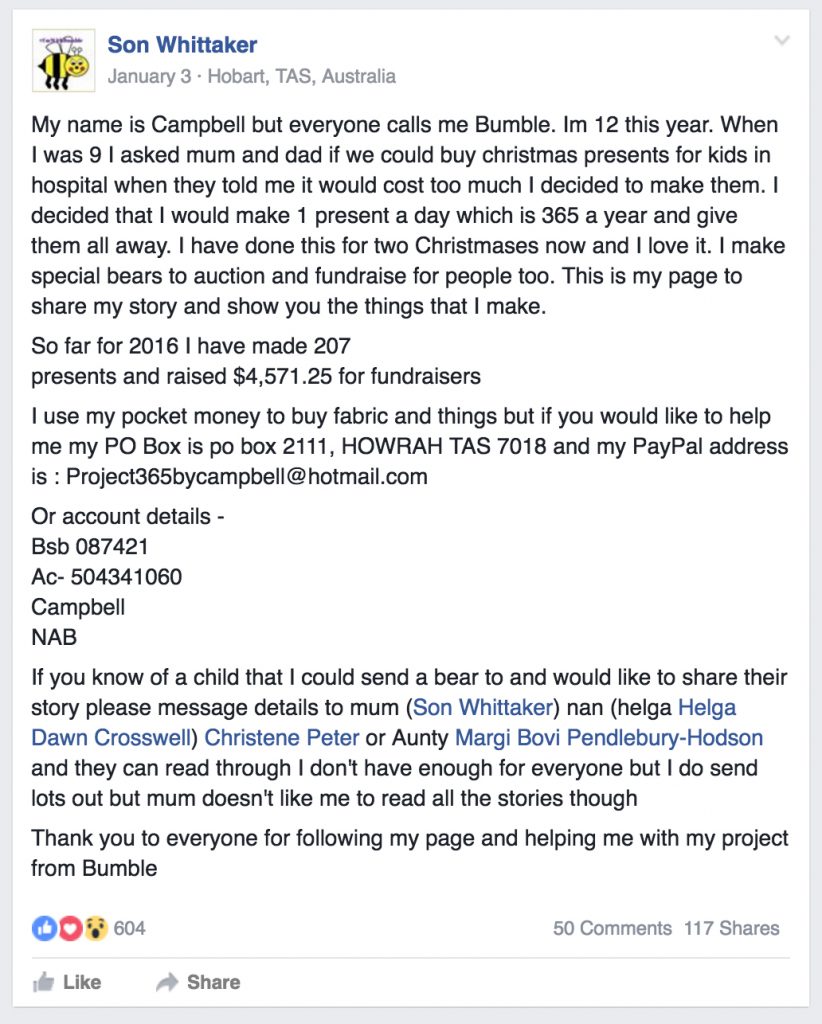 When she's not eating donuts or writing about uplifting and funny stories for Everything Inspirational, you'll most likely find Stacie Marshall behind a camera. She's a Richmond wedding photographer and portrait photographer, and admittedly takes way too many pictures of her cat, Natalee. ;)