The driver was going through a section of road that was under a bit of construction when a kitten was spied right in the road! Braking hard, and jumping out of the car, the Good Samaritan scooped the kitten up and carried her to safety. This was about to be a kitten rescue surprise!

Rescued Kitten Is Not What She First Seemed

Soothing the poor kitten, the driver began to check out the baby to see if she was OK. At first, everything looked fine. But then the driver studied the cat closer and noticed its short, stumpy tail and wide hazel eyes looking back at him. This was no ordinary house cat. 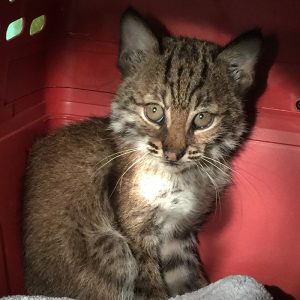 Hours later, the folks at Big Cat Rescue got a call to pick up a bobcat kitten that had been left at a veterinary hospital. There they found the feisty kitten all taped up in the cardboard box the driver had placed her in. That feistiness was a good sign for the little girl.

“We don’t want them to be nice or friendly towards people. So she was being exactly what she should be — a wild bobcat.” said Jamie Veronica from Big Cat Rescue.

“We had to un-tape that box and put on some really thick work gloves so that we could transfer her to our crate,” Jamie said.  The only thing obviously wrong with the kitten was that she was a little underweight and was clearly separated from her mother. “The whole way to the location where we picked up the kitten, the road is under construction,” Jamie explained.

“A lot of times, when they’re doing a lot of development in the area, it displaces the animals that live in that forest. They start to move to try to find new territories to live in, and start crossing roads that they normally wouldn’t, and during that time they can get easily separated from their parents if there are cars going by. But we don’t know for sure.” 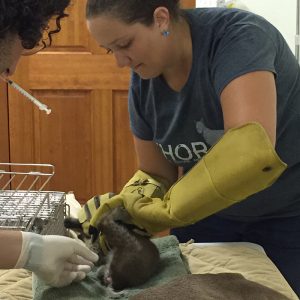 The bobcat kitten, now lovingly called Spirit Feather, will spend about 3 months at Big Cat Rescue before she can be released. In the meantime, this kitten rescue surprise  spends a lot of time napping and playing with her stuffed animal squirrel friend. Big Cat Rescue is using Spirit Feather to help educate the public about bobcats.

“Bobcats are often misunderstood,” says Jamie. “We get a lot of calls from people who see a wild bobcat in the woods behind their house, and they’re afraid of it. But they’re really great neighbors to have. Bobcats don’t want to come around people, they don’t like to bother people’s pets. But they do eat snakes and they eat rats — things that you don’t want near your house.”

Check out this video of a daring rescue of a kitten who was actually driven over 13 times before a motorist came to the rescue!

The Mozart of Chickens Plays The Piano