Judy Rose was shopping  at her local hardware store when she saw something that made her stop and take notice. Judy snapped a photo of the dog seated protectively next to a Lowe’s employee after she spied the familiar Lowe’s logo on the dog’s vest. The Lowe’s store hired dog and his Army veteran friend.

The retired Army veteran was struggling trying to find an employer who would hire him and his dog, but that was before he applied at this Lowe’s store in Texas. After Judy posted the photo to Facebook commending the Lowe’s for supporting a veteran in this way, the photo quickly went viral. And everyone is praising the veteran and his service dog, and commending Lowe’s for their support of the veteran. 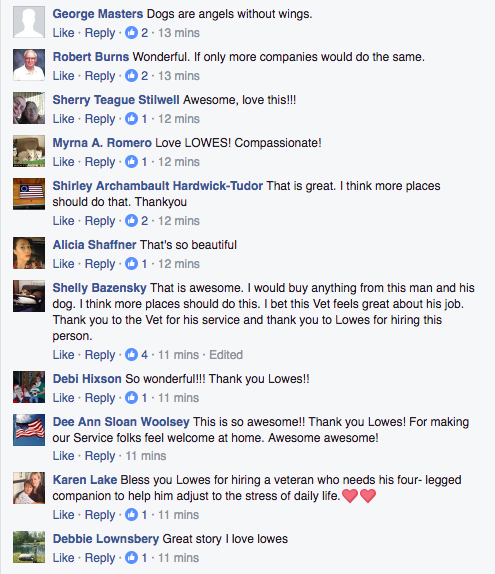 Hurricane Irma Delivered Its Worst, Strangers Stepped Up with Their Best

Mysterious Vision Goes Viral As Internet Guesses What It Is

He Needed 10 Volunteers To Help Senior Citizens, 100 Showed Up

Widow Befriends Neighbor’s Puppy And The Two Are Inseparable