Emmy winning TV sitcom legend and Oscar nominated film actress Mary Tyler Moore died Wednesday, January 25, 2017 after health problems and a recent hospital stay. “Today beloved icon Mary Tyler Moore passed away at the age of 80 in the company of friends and her loving husband of over 33 years, Dr. S. Robert Levine,” her longtime representative Mara Buxbaum said. “A groundbreaking actress, producer, and passionate advocate for the Juvenile Diabetes Research Foundation, Mary will be remembered as a fearless visionary who turned the world on with her smile.”

Mary was best remembered as Laura Petrie on The Dick Van Dyke Show, and as Mary Richards on the Mary Tyler Moore Show. She started her career off as a dancer in the 1950s. She first appeared as a dancing elf Happy Hotpoint, on a series of Hotpoint appliances TV commercials which ran during “The Adventures of Ozzie and Harriet” TV show.

The actress had battled complications due to Type 1 diabetes since her 30s, had multiple surgeries for her deteriorating eyesight, and in 2011 had surgery to remove a malignant tumor from her brain. Mary was known on screen for her bubbly personality, but she had many hardships in her real life including struggles with alcoholism and the 1980 tragic death of her only son. 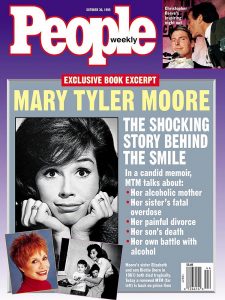 Mary was an advocate for 30 years as the chairman of the Juvenile Diabetes Research Foundation, which helped advance diabetes research. “When I was first diagnosed, I debated about how up front I should be about my diabetes and whether telling colleagues might hinder my work as an actor,” Mary said. “But I also realized that if I did speak out, I might be able to help others better cope and manage their diabetes.”

There are no words.
She was THE BEST!
We always said that we changed each other’s lives for the better.
I… https://t.co/Xm8OBbQQ8j

“My heart goes out to you and your family. Know that I love you and believe in your strength,” said former co-star Ed Asner on Twitter. He also tweeted, “A great lady I loved and owe so much to has left us. I will miss her. I will never be able to repay her for the blessings that she gave me.”

A great lady I loved and owe so much to has left us. I will miss her. I will never be able to repay her for the blessings that she gave me.

She Hated Her Proposal Pictures, But Her Wedding Pictures Went Viral

Surprise Dancing With The Stars Proposal During Live Show

Fred Rogers Surprised By Boy He Inspired In 1981