Husband Texts Wife to Reschedule Family Portraits Because of a Mishap

In a well-designed prank, Bobby Wesson convinced his wife that their son had a mishap…with hair clippers so their family portraits must be cancelled.

Bobby Wesson is no stranger to viral internet posts and frequently plans elaborate pranks for his social media audience. This prank on his wife was no exception.

Bobby explained that it took 3 weeks to plan, including Photoshop classes, and another month to find the perfect moment to execute. He went on to explain that as a trauma nurse, Rayena is under a lot of stress. Not wanting to upset her too much, Bobby waited until she was having a calmer day before pulling the prank. (Check out Bobby’s sweet post that went viral about his wife in November 2015. All jokes aside, he truly cares about her.)

This Birmingham, Alabama Dad is lucky he has a wife with a such a good sense of humor! We all fear the day when our child might find the scissors or hair clippers. When it appeared that their son Deacon had gotten hold of hair clippers, Rayena naturally lost her cool. Adding to her distress, the family was scheduled to take professional portraits together.

“She was so meticulous in planning these photos and picking out the photographer and the outfits,”Wesson told TODAY

Bobby’s prank was so successful that Rayena was ready to leave her patients and drive home to access the damage (and probably kill her husband). After leading her on for a while, he stopped the prank when she began to get truly upset.

*As Rayena got more upset, some of her language was a little ‘colorful’, so we censored the posts.

Bobby started by reminding Rayena how much he loved her,

“Remember how when u were pregnant I took care of everything and cooked and cleaned and wouldn’t let you lift a finger bc I love u so much?”

In any solid relationship that is code for “I messed up”.  Rayena took the bait and that is when Bobby sent a photo of son Deacon with a giant chunk of his hair missing. 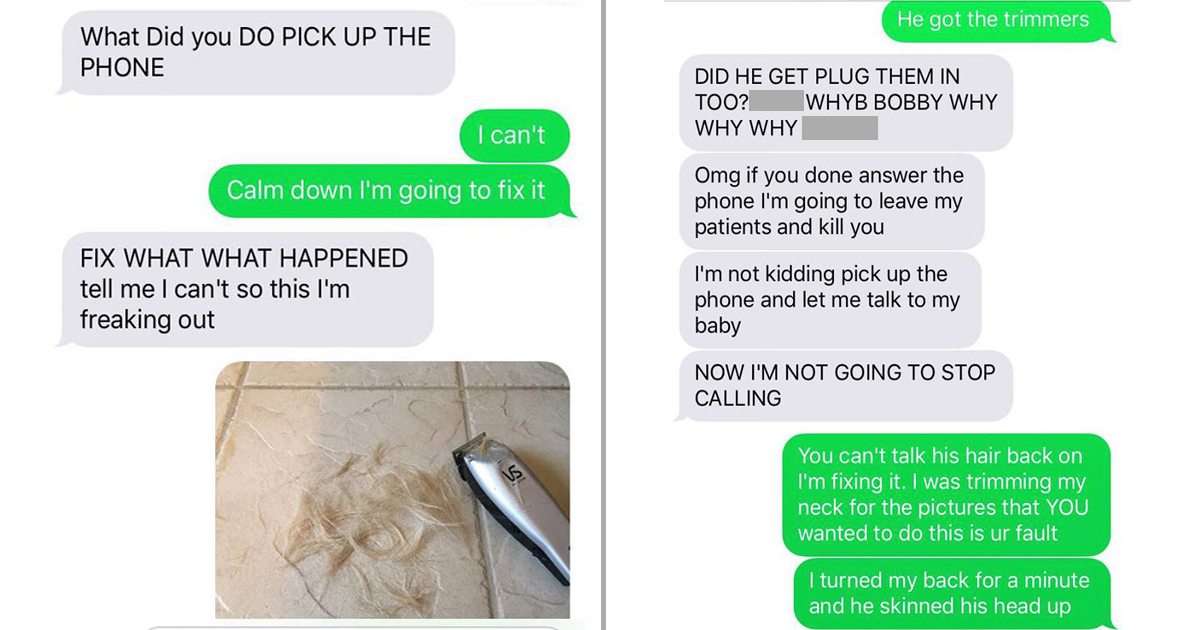 If the picture of their son missing a track of hair wasn’t enough, Bobby then texted Rayena a photo of blonde hair (from a thrift shop doll) on the floor next to a razor.

“Calm down I’m going to fix it”

Rayena had started calling Bobby’s phone. He says he knew that not answering would get more of a reaction, so he decided to let the prank play out a little longer.

“You can’t talk his hair back on, I’m fixing it. I was trimming my neck for the pictures that YOU wanted to do, this is ur fault. I turned my back for a minute and he skinned his head up”

Bobby could tell he really had Rayena going at this point.  So he sent another photo of Deacon.

“Calm down, I fixed it some. Maybe we can get his pics at an angle or something”

As Rayena was getting ready to go off break at work, Bobby ramped up the prank just a little bit more. He decided to pull on a mother’s heart by telling Rayena:

“He just saw himself in the mirror. He’s super upset and won’t stop crying, Baby what should I do? Baby, you can call me now”

Just when you think it can’t go any further, Bobby ups the prank one more time.

“He’s sooo sad. I think he’d feel better if I shaved my head too. Say goodbye to it. He won’t stop crying. Gotta do it.” 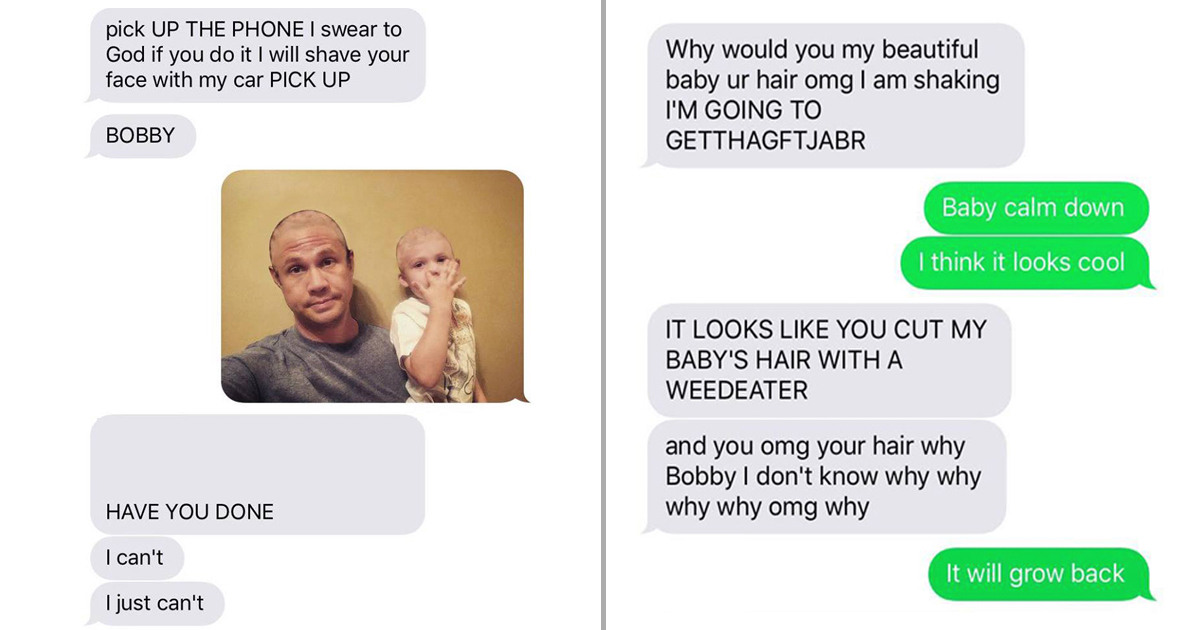 For dramatic effect, Bobby still doesn’t answer his phone. He instead sends another photo of himself and Deacon fully shaved. At this point, Rayena completely loses her composure in her texts. She now fully believes that both her husband and her son are bald.

And that’s when Bobby reigns it back in and sends Rayena the same photo without the alterations. Rayena’s fellas still have their hair, it was all a joke.

“It’s photoshop baby, no ones head is shaved, everything is fine”

Bobby’s parents weren’t far behind the rest of the internet in responding to the prank.  Judging by this post from Bobby’s Dad, it’s obvious that the humor bug must run deep in the Wesson’ blood!

YOU MAY ALSO LIKE: Woman Texted Husband About ‘Stray Puppy’ That Wasn’t What It Appeared 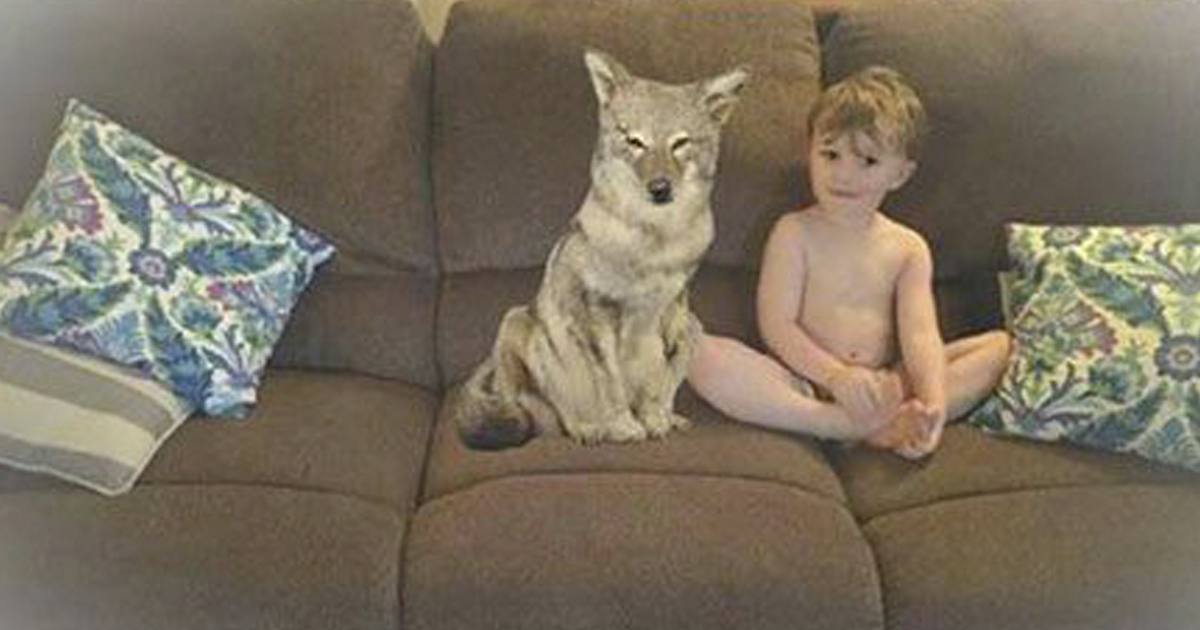 Squirrel Named Jill Was Rescued During Hurricane And Found A Home

Bride Thinks Her First Dance Is Ruined, But Has The Tearful Surprise Of Her Life