While doing a routine patrol, a group of Navy personnel had no idea that they were in for a very large task. They saw an elephant trunk sticking out from the ocean, so they drove their boat over to get a closer view. They found that a wild elephant was submerged under water and was fighting for its life.

It is not unusual for an elephant to swim in such large bodies of water, but waters were going rampaged this day. The poor elephant was dragged too far out by the strong currents. It was trying to keep its trunk above water to breath but was having a really hard time.

The Navy personnel quickly called for a second boat to help rescue the distressed mammal.  Suited up in scuba gear, a few Navy Divers swam tie ropes around the giant animal. Other rescuers tied the other end of the ropes to the boat.

One of the Divers got on top of the elephant to help support its trunk and keep it above water. The other boat, staffed with a group of wildlife officials, carefully dragged them to shore with the rope.

Though it took twelve hours for the rescue mission to be complete, the elephant was safe and sound! It was left in the custody of the wildlife officials to get checked out. They made sure that he was well before releasing it right back into the wild!

“It is a miraculous escape for the elephant”, Lieutenant Commander Chaminda Walakuluge, said to AFP.

WATCH: The Wild Elephant Get Rescued 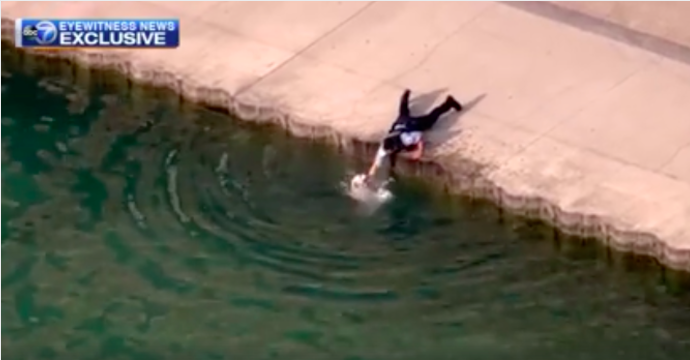 Chicago Police were responding to an early morning four-car crash when they came across a frightened and thirsty pit bull. >>READ MORE

Man Dresses Up As His Dog’s Favorite Toy

Baby Moose Chooses Human To Be Her BFF